Freshwater pearl (FWP) cultivation dates back to 1915 when M. Fujita began his pearl culturing at the Lake BIWA near Kyoto. First he tried to use the bead-nucleus technique. He realized that it was not necessary to use bead nucleus however tiny pieces cut from the mantle tissue of a donor mussel then he implanted these pieces into the thick mantle of the mussel when it is between six to eight months old. Since the pieces of mantle tissue serve as nucleus, these the pearls are called tissue-nucleated FWP. These pearls are composed almost completly of nacre and this is the reason why only a low percentage of them are almost round. A Hyriopsis schlegeli mussel can accept 40-50 grafts of mantle tissue. The growing period is between 12 to 30 months. For a long time Biwa pearls were a synonym for freshwater pearls. The over-harvesting had caused the virtual extinction of the Hyriopsis schlegeli. Because of this fact as well as the high-level of pollution of the Lake Biwa the pearl production was stopped in 1980’s.

In seven years Japanese researcher could work out experimentally a hybrid mussel, which is a cross of Hyriopsis schlegelii and Hyriopsis cumingii species at the Lake Kasumigaura. Culturing pearls with this pollution-resistant mussel is performed with bead nucleus. Mother-of-pearl or reject akoya pearls are used for nucleus. The product is called kasumigaura pearl or simply kasumi pearl in the trade. Their sizes range between 9 and 13mm. Their form is usually baroque with a unique rippled surface. These bead-nucleated freshwater pearls are found inbrilliant colours (white, cream, orange, peach, golden-green and pink), the rarest colours are purple and neon-green. 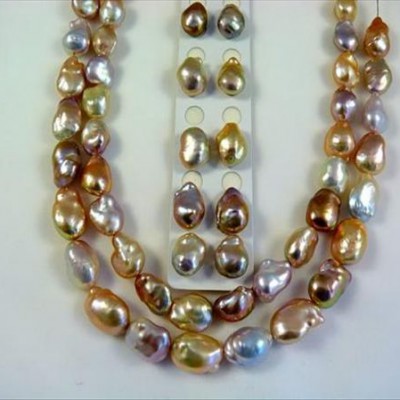