Before going into detail of pearl culturing I want to offer a brief survey of mussel and oyster species which are generally used for pearl cultivation. 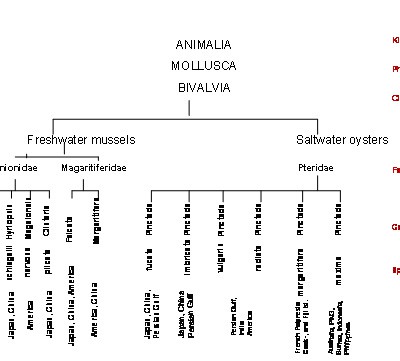 Pearl cultivation is a unique co-operation between the nature and human being. If the human complies with the rules, the grafter is skillfull and also the nature is gracious (no hurricans, no red-tide, etc.) , there is good chance to getting nice pearls.

Three kinds of pearl cultivation can be distinguished:

1. Both natural blister and cultured mabé pearls resemble a blister on skin, that is why it is called blister pearl. In order to culture it, a semi-spherical  piece of plastic is attached against the inside MOP surface of the mollusc below the mantle tissue.  As a result of the secretion process it will be covered  by nacre. After a year it will be cut from the shell, the plactic is removed and the cavity is filled with different types of materials, regularly epoxy-resin. To finish the procedure it is backed by a piece of shell. It is ready to set into jewelry, usually pendants. 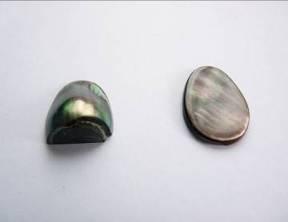 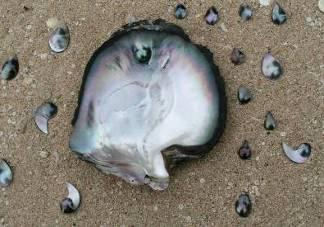 In the left photo we can see the dark brown epoxy resin covered by MOP-layer, beside it the polished back-piece can be seen. In the right photo among the ready-made mabés we can see an oyster shell with a mabé in it.

2. As it derives from its name, no bead-nuclei are used but pieces of mantle tissue. In such a case the nucleus is the piece of mantle tissue.
This sort of cultivation is used for producing freshwater pearls (FWP)   Many small pieces of grafts cut from the mantle tissue of a donor mussel. This way a mussel is able to produce 20 to50 FWP.

3. Usually a round bead (nucleus) is insterted into the oyster along with the epithelial graft. First the technician creates a cavity on the gonad, then inserts a piece of mantle tissue into the cavity while being careful that the nacre-secreting side of the mantle tissue would face up, finally he places the nucleus on the graft. The whole operation takes 2-3 minutes and the oyster will be put back into the water. In the next few weeks around the nucleus a pearl-sac is formed and the epithelium begins to secrete very thin (0,5 – 1micron) concentric nacre layers covering the nucleus.

This process can be followed under the menu item Tahitian pearl farm in photos.