For determining the quality of a pearl the combination of the below-mentioned factors are used, the most important factors are the luster and surface perfection.

The lustre is the most important quality factor: If there are two pearls beside each other, the first is a perfect cultured pearl, the second is a pearl imitation, we can see the difference how the light bounces of each of them. The latter pearl is brilliant, the light reflects from its perfectly smooth surface like from a mirror. However in case of the cultured pearl the lustre is composed of light reflecting from the surface and of light refracting from the different layers of nacre, that is called the inner glow of the pearl.

The sketch below will illustrate how this subtle glow is developed. When the ray of light hits the pearl, it is split into two rays. One reflects from the surface while the other keeps on travelling through the nacre layers. Due to the different material densities the light changes speed, thus the light ray bends. Every time when hitting a new layer the same happens: one ray is refracted, the other travels on…etc.. 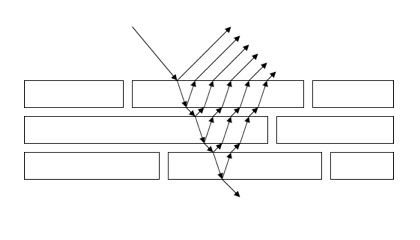 The light ray is going to hit the next layer

Surface quality – no matter how perfect a pearl is, its surface is never totally smooth but grainy. If you rub it perpendicularly along the edge of your upper front teeth (provided you do not have false teeth) and it feels gritty, you can be sure, it is real pearl and no imitation. There are very few pearls with completely flawless surface. Most of them have some blemishes (bumps, flats, pits, spots, cracks, martelled surface, etc.). No magnifying glass is needed for judging the the surface quality of a pearl. There are blemishes that can affect the durability of a pearl, other kinds of blemishes do not. Some small pits and abrasions that are visible to a naked eye belong to the latter case. The so-called martelled or hammered surface does not really affect the value of a pearl, nevertheless such a pearl cannot be judged as gem quality.

The size of a cultured pear is measured in mm through the diameter of a pearl. In general, the larger the pearl the more valuable it is, ceteris paribus. Natural pearls, are measured by weight.

Regarding their shape, pearl can be divided into different categories. The basic categories are round (Rd),   semi-round (SRd) , semi-baroque (SB) and baroque (B) Round pearls are almost perfect spheres with diameter variation rate between 0 and 2%. Pearls with diameter variation between 2 and 5% are called semi-round ones. Semi-baroque pearls exhibit an axis of rotation and can be sub-divided into circlé, button, pearl, oval, etc. referring to the physical appearance of the pearl. Both semi-round and semi-baroque pearls can be called as pearls of symmetrical shape. Pearls which cannot be classified into any of these groups are called baroque.

In the course of long history of the pearl, people were obsessed to possess round pearls. It is no wonder, since the chance to find a spherical pearl was very low thus it commanded a very high value. Since the beginning of the 20th century a new era began: due to the bead-nucleus pearl culturing the round pearls suddenly became available in large quantitites. Most of the first pearls were spherical due to the rather thin nacre layer around the nucleus.

The question is raised: what determines what shape a pearl will have at harvest? At first sight the answer is not difficult: a bead-nucleated culturing process results in round pearls, while tissue-nucleated would yield a non-spherical one. The reality is completly different. Though it is true that pearls with thin mother-of-pearl layer are usually round. But as the nacre layer is getting thicker, the shape can be anything but round. Numerous factors can affect the shape of a pearl. Perhaps the most fascinating how the semi-baroque pearls are developed. In 1994 I asked a Japanese grafter about it in a pearlfarm in French Polynesia. Without thinking a second he replied: „just because it rotates in the pearl-sac…”Later I heard the same opinion from other pearl-farmes as well and in 2005 it was proved by researchers. 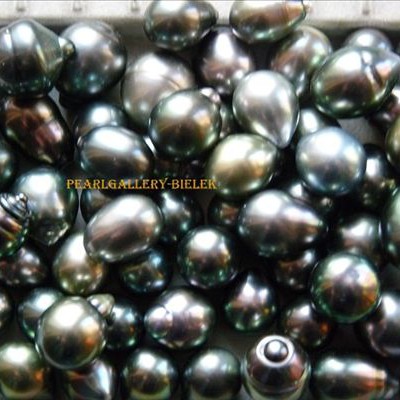 Tissue-nucleated process usually results in different shapes like baroque, semi-baroque and semiround. Though due to the latest development almost totally spherical shapes could be achieved.

The colour of a pearl is determined by three factors:

There is no international grading system for pearls. Most of the pearl companies have adopted the A-letter grading-system, where AAA represents the highest grade and A is used for the lowest quality. The A-B-C-D -grading system is used mainly for the South-Sea pearls (SSP) and the Tahitian pearls. It happens that a pearl’s quality falls between two grades, in such a case – or + signs are used, eg. AA+ or B+ Using any of these systems a special category is used for pearls of exceptional good quality: It is called Hanadama with A-letter-system and Gem quality (or Top gem) when A-B-C-D-system is used.

The five grades of GIE classification are as follows:

A grade: Less than 10% of the surface with imperfections. Beautiful luster and rich orient.

B grade: From 10 to 30% of the surface with imperfections. Good to beautiful luster and orient.

C grade: From 30 to 60% of the surface with imperfections. Average to beautiful luster and orient.

D grade: Over 60% of the surface with imperfections. Poor luster and no orient.