First experiments for pearl culture began in French Polynesia already in 1884 but because of poor result they were given up. Serious research activity began  when the first Japanese specialist arrived in 1962. He grafted 5.000 oysters and  1.000 pearls were harvested three years later. Some years later the first pearl farm was established in Manihi, where in the first period only mabés (half pearls) were produced then the culturing of whole pearls began in 1968. The first Tahitian cultured pearls appeared in the biggest jewellery stores around the world in 1972.

Tahitian pearls are cultured on the low-lying coral atolls of the Tuamotu and Gambier Archipelago. The coral deposited on the summit of volcanos extincted millions of years ago. These atolls look like a champagne glass: outside the open sea, inside the shallow (30-40m deep) lagoon and the people live on the narrow rim. Of  the 400 atolls in the world there are 84 such atolls in French Polynesia. The nutrient-rich waters of the lagoons ensure favourable environment for development of the oysters. The nutritive substances rich in plankton and mineral salts come from great depth of the sea. There are atolls with an opening to the sea and there are closed ones with narrow and shallow channels. In both cases the seawater can get in from the sea bringing the nutriment for the oysters.

What is required for culturing Tahitian pearls?

And now let us take a look at the first grafting. It is a real surgery and beside the knowledge and manual skill it requires special tools.
The oysters to be grafted are removed from the long lines and brought to the grafting shack. They are cleaned, growths and parasites are removed. One of the workers opens the shell slightly with a special device and inserts a wedge.

For the first grafting a donor oyster has to be sacrificed. It must be a healthy one, if possible with the desired peacock colours of the mother-of-pearl. After the grafter fully opens the oyster, with scissors he cuts a 5-10 cm long and 2-3 mm narrow stripe from the brim of the mantle then streches it on a wooden board and with a slicer he cuts it into 2-3 mm tiny pieces. These are the epithelial tissues which are going to secret the nacre around the nucleus. One donor oyster can yield enough epithelium for grafing 50-60 oysters and it is important to keep them wet.

In the meantime one basket is packed with the „pre-stretched” oysters and they are brought to the grafter. He grips the first oyster, places it into the shell holder and inserts a spreader with ratchet between the valves of the oyster. After having found the gonad the grafter makes a small incision in it and inserts a graft (piece of epithelial tissue) then a nucleus into the small cavity. It is important that the nucleus is positioned against the graft. A requirement that sometimes cannot be checked by eyes, it needs an incredible skill. Then he removes the spreader and puts the oyster back into the basket. The actual operation period is less than one minute. One more action before immersing them into the water: two small holes have to be drilled in the hinge of the oysters and with a plastic string they are attached to a coloured rope or into a kenguru basket. Since the oyster can survive out of seawater only for a short time, they have to be put back first into the shallow water under the grafting shack then the following days they are carried to the long-lines where they are going to stay two years.

What is going on after grafting?

Unfortunately lots of oysters do not survive the operation and lots of them reject the nucleus. Using  gene-treated nuclei this rate has been improved. If the grafting was successful, a unique process is taking place in the gonad of the oyster: in the first month the epithelium grows and encases the nucleus thus forming a so-called pear-sac around it. This pear-sac is going to secrete and deposit the nacre made of protein and calcium-carbonate crystals called aragonite in concentric layers around the nucleus. Thickness of these layers moves between 0,3 and 1,0 micron and just like the fineness, it is mainly up to the water temperature.  When the incision on the gonad heals quickly and the sac covers the nucleus completly, there is a good chance that a nice round pearl is formed. If not, the nacre layers will be deposited in some irregular fashion producing pearls of different shapes like semi-round, semi-baroque or baroque.

If no hurrican or virus has devastated the oysters, the most exciting phase of pearl culturing is arriving, it is the harvest. At this time it turns out if the invested work and money will be crowned with success. The harvesting process is much like the grafting: oysters detached from the long-lines brought to the pearl shack where they are cleaned and presented to the grafter. There are three possibilities:

For removing the pearl generally the same incision is made in the oyster’s gonad like when grafting. The grafter applies a slight pressure on the sac thus the pearl delivers. The pearls are kept in a dish filled with water. If the pearl is a nice round one and the oyster is judged healthy, a new nucleus –somewhat bigger than the pearl just taken out– can be selected and replaced into the pearl-sac. This process is called the second graft following the third one a year later.

Sometimes when the nucleus is rejected but the epithelium remains in place, the secretion process is accomplished and the oyster delivers a keshi. Its whole structure is nacre (mother-of-pearl) developed in baroque shape.

If neither pearl no keshi is found in the oyster but it is healthy, it can be regrafted, if not, it is sacrificed. The shells are collected and sold. In addition to mother-of-pearl buttons lots of costume-jewellery articles are produced of them.

It is recommended to observe the efficiency of an average pearl farm in French Polynesia.
Let us begin the cultivation process with 10.000 young oysters. Around 5.000 oysters will die due to natural mortality or predators and 500 pieces are not suitable for grafting. 500 oysters will die after grafting and 1.500 will reject nuclei. As of now 2.500 grafted oysters have remained. Additional 500 oysters will die in the course of the cultivation period. Result at the harvest: of the 2.000 pearls about 500 round pearls. If the rate of A-grade (high quality) round pearls is 10%, the pearl farmer has 50 high-grade round pearls of different sizes and colours. The question is whether a strand could be compiled out of them. Certainly not, not even a pair for earrings. Of course there are pearlfarms with more favourable results, while there are others with worse data.

Distribution of the Tahitian pearls 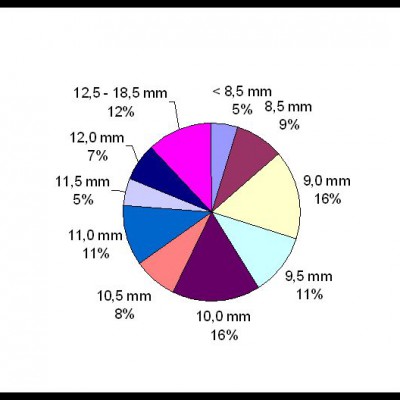 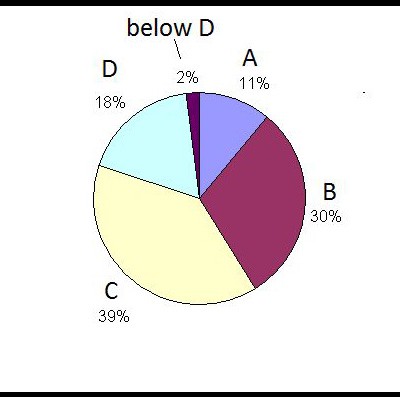 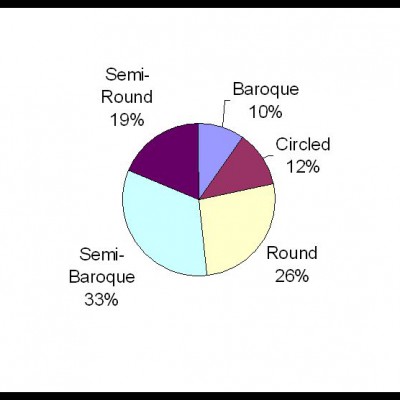 The shape circled can be considered a category of semi-baroque (SB) pearls, thus the total percentage of SB-pearls amount to 45 p.c.