How are pearls formed?

Formation of a pearl is similar to the way how the shell of a pearl-oyster or a pearl-mussel is created. In order to understand it, let us take a look at the structure of an oyster, e.g. the Pinctada margaritifera, the so-called black-lipped oyster. 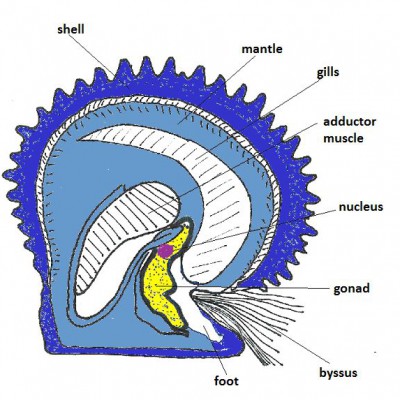 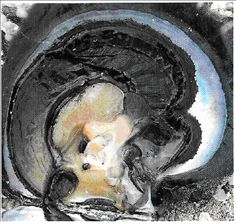 In the sketch below we can see the shell and the mantle creating the shell. The mantle is made up of soft tissues and consists of three layers. The outer layer (4) is covered by epithelium. It secrets proteins (conchiolin) and calcium-carbonates thus forming the two shells of the oyster. The inside layer (6) performs physiological fuctions while between these two layers there is a flexible sheet of connective tissue containing muscles, nerves and blood vessels.
The shell itself consists of three distinct layers: the outer layer is composed of thin layers of a hornlike material (1), the next one is a prismatic layer (2) consisting of calcium carbonate crystals laid in a matrix of conchiolin. The formation mechanism is similar to a brickwork where the mortar (like conchiolin) binds the bricks (calcium ,carbonate crystals). The inner layer (especially in case of species like Hyriopsis, Megalonais, Clistaria and many Pinctadas) is made up of aragonite crystals and conchiolin (3), with one word nacre or the mother-of-pearl (MOP). 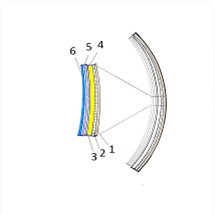 Thickness of each layers is up to the species, the Pinctada maxima and Pinctada margaritifera oysters have the thickest shells. No wonder that since the 19th century the sea-shell trade was focused on the Western and Northern shore of Australia, later on the coral atolls of French Polynesia. 300-400 tons of mother-of-pearl were yearly harvested and transported to England where commodities like buttons, small plates for furniture decoration, pistol grips, knife handles, combs, fans, etc. were manufactured. The pearls were sold in Valparaiso, later in Rangoon and Australia. Due to the rapid development of synthetic materials (plastics) the mother-of-pearl was less and less in demand thus their fishing was not profitable anymore. Old oysters were hard to find thus large pearls almost disappeared. In 1960 about 100.000 oysters had to be brought up to find one nice pearl French Polynesia, where the situation of the pearl oyster became catastrophic and pearl and oyster fishing was banned.

Based on the explanation above, it is already obvious how the mantle can produce the shell. It is time to examine how the natural pearl is formed within the oyster or mussel. According the classic theory a grain of sand penetrates the oyster, which irritated by the intruder, tries to cover the irritant (grain of sand) by secreting nacre. Unfortunately it is not quite true. Why? Just because a piece of sand is unable to make its way between the outer layer (4) of mantle and the nacre layer. It can get anywhere inside the oyster body, but no matter how much it irritates the poor oyster, it cannot do anything against it, since there are no epithelial cells available. However a parasite is able to get anywhere. Finally no matter what sort of irritant gets into the oyster, the secretion process can ONLY begin if also epithelial cells are right beside the intruder. One way if the parasite gets between the nacre layer of shell and the outer layer of mantle, the other way if the parasite gets into the body of oyster carrying epithelial cells with it.

Let us sum up briefly the fuction of the main organs of the oyster:

The gills are the respiratory organ of the oyster.
The muscles control the opening and closing of the shells.
The gonad produces gametes (eggs or sperm). It is the place where the grafter creates a tiny cavity and places the nucleus and a piece of epithelial graft cut from the mantle of the donor oyster.
By means of the byssus the oysters and mussels can attach themselves to a solid surface.