Beyond doubt China has been the largest producer of cultured pearls since the 1980s. For decades their pearls had been associated with relatively low quality however it is no more true, as the time of poor quality rice-shaped Chinese pearls are long gone. Of course in case of such a mass-production all sorts of qualities can be found, from the lowest to the top.

Freshwater pearl-culturing researches using the mussel Hyriopsis cumingii began in China in 1962 and three years later the first pearls were harvested. Japanese wholesalers purchased all the pearls and sold them as BIWA pearls. 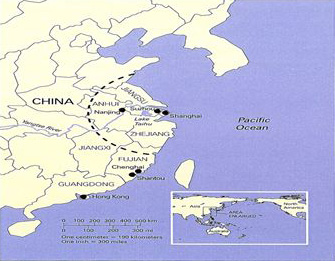 This time new pearl farms were established at the Lake Tai near to Shanghai and their production was increased rapidly. The Chinese FWP were first introduced at the Canton fair in 1972, nevertheless the whole harvest (11 tons) was sold to Japan. Early 1980 the Chinese at last established their own trade organisations and started their marketing campaign all over the world. Suddenly the rice-shaped Chinese freshwater pearls became a substitute for BIWA-pearl.
The first mistake was committed: instead of Hyriopsos cumingii they began to use the mussel Clistaria plicata, since this mussel required shorter growing period, but its yield had lower quality. By the end of 80s the Chinese had to face the consequences of over-production. Notwithstanding they kept on increasing production in the hope they would be able to compensate for the losses. They were wrong. All the pearl companies were forced to sell the pearls at dumping prices. Annual production was over 200tons by 1990 thus the goverment regulated the production by law however a few years later the market was liberalized again.   Over-production began once more in 1994 when the freshwater pearl yield reached 500tons. 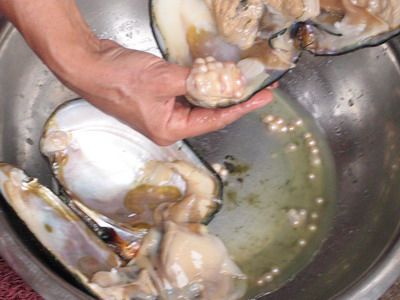 Pearls are still in mantle

Freshwater pearls in China are cultured in lakes, rivers and ponds, where the latter is used the most frequently. The mussels live mainly on plankton: the more plankton in the water, the more rapidly the mussels grow. In order to increase the quantity of plankton, the ponds need to be fertilized. However too much fertilizer can generate euthrophication that results in excessive algae growth, toxins thus seriously degrades the water quality… Sometimes the pearl farmers try to keep the balance with nature but after a while they are tempted again to neglect it. But even if they try to keep the water clean, due to intense nationwide economic development and industrialization it is impossible. Due to this fact many pearlfarmers were obliged to transfer production from the coastal regions to less polluted waters in central China. 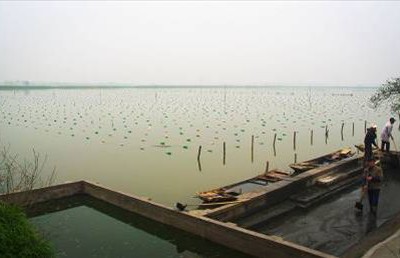 In the meantime new shapes were offered: 4-8mm semi-round (potato-shaped) pearls, flat pearls, almost round strands between 8 and 12mm, furthermore Chinese began to use different methods for dying pearls thus they could create demand on the international market. From the 90s Chinese pearl farmers started to use again Hyriopsis cumingii, see below: 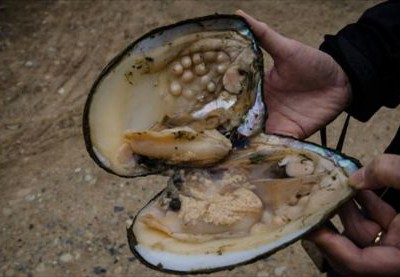 By the millennium the Chinese pearls obviously dominated the pearl markets reaching the annual yield of 1000 tons. In addition to the hugh quantities they could offer gorgeous large almost round pearls between 10,0 and 15,0mm commanding exceptional high prices. Of course the rate of such pearls amount to 1%.
In addition to the over 3000 tons annual pearl production a fancy product of new culturing technique was presented in 2010. How it developes, it is rather unique: at the second harvest after the pearl is removed from the pearl sac, it is filled neither with tissue nor nucleus but an earthen substance. It absorbs the surrounding moisture and begins to swell up the pearl sac which accepts this new kind of nucleus and produces a large baroque pearl of high luster and deep orient. The metal oxides in the mud are supposed to be responsible for the great colour variation. After taking out this new pearl from the mussel, a hole is drilled for removing the earth. The result is a lightweight hollow pearl. It is the so-called Soufflé pearl since the French word souffler means to blow in English. 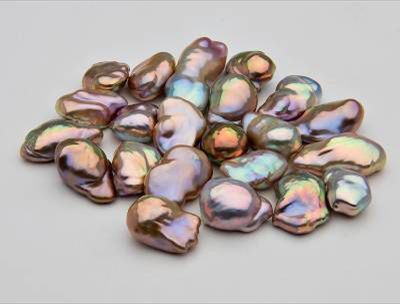 As seen above, the soufflé pearls sparkle in the most amazing range of colours

But the story is not over yet. By the time when the soufflé pearl is harvested, the pearl sac in the mussel has already been expanded to such a size that it can accept a very big nucleus. Applying the newest Chinese technology and techniques of pearl culturing, this is the way how the largest bead-nucleated freshwater pearls are produced. Their sizes go up to 17mm, shapes: round, semiround and semi-baroque. These pearls are brand-named as Edison-pearls and Ming-pearls. 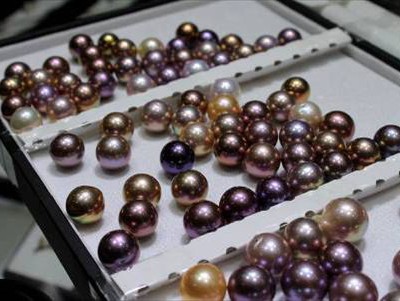 Pearls above are Edison pearl, while pearls below are Ming pearls 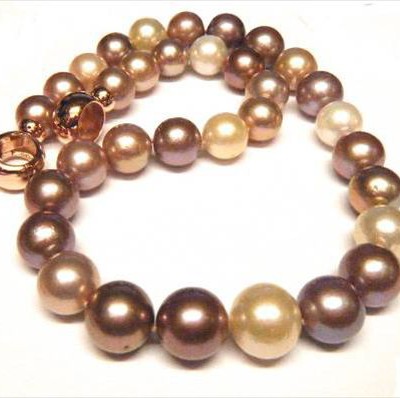 As we can see the Chinese researches do not stop their effort in order to explore new ways how to cultivate large, round, colourful pearls. The above-mentioned pearls offered at the big international jewellery shows certainly excited great admiration and commanded high price.
The Chinese pearl farmers are supposed to have learned from their often committed mistakes of over-producing low-quality pearls and they have acknowledged that they need to give preference to unique, large, colourful, high quality pearls. The proper techniques applied by the pearl farmers certainly influences their close environment thus the quality of their pearls. But what they cannot control, it is the impact of severe nationwide environmental damages on their products. Water pollution in China caused by the industry and agriculture is in catastrophic state. In 2015 a new Water pollution and control plan was released in China, it is only to be hoped that the laws will be stricktly enforced. 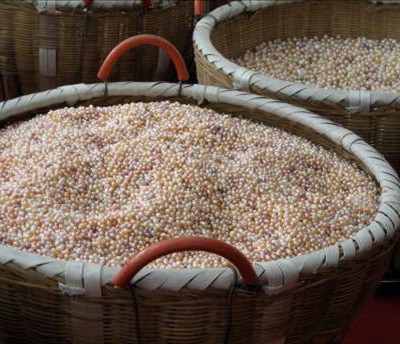